Emmie liked to talk. She talked when her mother pulled up the shade in the morning. She talked when brushing her teeth – foamy white painting her chin. She talked while she pulled her purple panda shirt past her ears. She talked at the kitchen table, her tongue bouncing off consonants and cheerios.

“Esmeralda, if you don’t stop talking, your head is going to fall off,” said her mother. 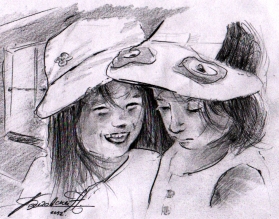 Emmie talked to her bus driver as she bounced to school. She talked to her best friend, Yasmarie. And to Perilla, Jules and Marjoram. Yasmarie tapped her toe and sighed.

“Esmeralda, if you don’t stop talking, your head is going to fall off,” said Yasmarie.

Emmie talked in school while Ms. Plover explained why the sky turns red. She talked to Theo about leading the runner and what Katydids do. She talked at recess and at lunch…and all through Art and Music, too.

“Esmeralda, if you don’t stop talking, your head is going to fall off,” said Ms. Plover.

“Esmeralda, do you ever stop talking,” her father asked.

Emmie was quiet – a first.

But down the hall and through the walls Emmie’s voice rolled to her parent’s room. Her dad turned to her mom and said,

“If she doesn’t stop talking her head will fall off.”

During morning’s bright blue while her mother tugged the shade, Emmie leapt to her feet to greet the day.

“I dreamt of a waterfall at the end of my bed and why does it rain Kyle sleeps on his face so spiders won’t crawl in his nose I watched an ant carry a crumb can you buy me a prism I walked through it but didn’t get wet it was a falling wall of colors splashing it turned into a rainbow and I got down real close like this and said to the ant Hello it is me whad’dya say?”

And while she was showing her mother how to talk to an ant Emmie’s head rolled off her shoulders and out the door.

“This is an interesting start to the day,” said Emmie’s noggin as it echoed down the hall.

Over the front steps and across the lawn, her head gained momentum, Emmie and Mom in tow. The postman stepped back when she saw.

“Help us,” yelled Mom. The postman slung her strap and followed the talking head.

It rolled across the street, heedless of traffic. The policeman blew his whistle, but the noggin blew by.  It rolled past the dog park, talking in circles. Leashes were yanked free and a pack formed to the rear, urging her head on.

It rolled past her school.

Yasmarie looked through glass and turned to the class.

“Ms. Plover, I think the Continuous Infinitive will have to wait…I need to be leaving.”

She joined the chase.  Kyle and Theo, Marjoram and Jules, Perilla and Ms. Plover followed.

“Emmie’s head or bust,” they shouted.

Emmie’s mother raced ahead of the line, holding Emmie’s hand. The postman, the policeman, the dogs, a neighbor or three, dog-owners yelling, “stay!” and a reporter for Dead Spin all stopped when Emmie’s head rolled into a thicket.

“We’ve lost her,” said the policeman.

In the distance they heard babbling.

“She’s in the brook,” her friends shouted.

They ran to its banks. Emmie’s head had set sail…talking. The Coast Guard in her wake.

“Does she never stop talking,” yelled the Captain through his bullhorn.

“When she’s asleep,” answered her father diving off the bridge, tweeting the news.

He swam to Emmie’s head and held it high with one hand while crawling like a half-Australian to shore.

With elbow grease, spit, polish, and the devil’s own details, he screwed her head on straight.

Emmie looked at her dad.

“Esmeralda, what do you say?”

Esmeralda: She holds her tongue.

Brian started telling stories to himself when he was five years old and is pleased to be sharing the experience with a wider audience.  His first novel, The Feast of the Moon, is now available in paperback and as an e-book.

1 thought on “Emmie Learns a Lesson”