The day seemed not to notice her. The Sun made no slight dimming and brightening to announce her release into the world. The winds did not gather about and spin her in-stride as she ran through the bluegrass and rye of the great green field across the street from her home. The sky remained soaked in the same clear Azure she knew.

But someone was taking note as Emmie neared the little wood at the center of the park.

Emmie walked. Sometimes skipped a step or two. Sometimes bent to retrieve a likely stick along the woodchip path meandering to the foot bridge. She bounded up the bridge’s two rough-hewn, worn to gray, pine-board stairs.

Often it was little more than a gully, but today the stream ran strong, which was why Emmie was there. She toed the bottom crosspiece of the bridge’s picket fence and hooked her arms around the crowning crosspiece and pitched the stick up-river. Then she unhooked her arms, jumped down and darted to the downriver railing. She hung from her armpits, waiting.

The stick arrived – neither pausing to accept praise nor express its thanks – and continued navigating the fickle currents until Emmie could no longer track it.

This she did again.

And again until she was out of sticks, which arrived just as she wearied of playing. As if the sticks’ counsel had been sought in the devising of the game.

And her armpits hurt, too.

She leapt off the bridge and sometimes running sometimes skipping all times singing continued down the woodchip path. It traced a wobbly U through the little woods so that when she reemerged into the sunlight she would be facing home.

Emmie finally noticed who had been watching her. She had been standing near the bridge while Emmie played. She didn’t need to hide to be invisible; she could will it. She stepped from the shadows, muscles tracing sinuous grace, to stand in the woodchip path blocking Emmie’s way.

“Now what will you do,” asked the grey wolf. END_OF_DOCUMENT_TOKEN_TO_BE_REPLACED

A story from the novel The Feast of the Moon as told by Ichilles to his friend Shrew:

“Does it contain the words: and that is the end?”

“So, I have something to look forward to.”

I had lied: I did not know how it would end. When I started a story without knowing what shape it would take (I imagine the Sun had that problem when He created opossums), a voice behind my eyes picked up the first acorn it saw and handed it to me.

“This is a story about Hamster and Bluejay and a very long winter.”

“But the story is not long,” I added.

“The winter I spend this evening listening to it will be.”

I ignored him and continued.

Long ago, when the world was still warm from the Sun’s paws, Hamster and Bluejay were trading songs, enjoying the cool of the evening. END_OF_DOCUMENT_TOKEN_TO_BE_REPLACED

Emmie hung from the railing by her armpits, watching her twig navigate the listless currents of the stream. Four of its predecessors had snagged themselves on a mat of branches by a Y in the stream.

The twig caught itself in the tangle. Emmie sighed. Then she looked up. Someone was singing.

The light voice rose and fell amidst the breathing cadence of the woods. She tossed her fist of twigs over the railing and ran off the bridge following the stream, sometimes retreating to the woodchip path when the underbrush became too thick.

The woods were attached to the great green field across street from her home, and all of it resided within a large municipal park. A row of houses bordered the woods’ eastern edge; a branch of the stream flowed behind their back yards. Emmie stood on its embankment and peered into one of these backyards.

A girl about her age was idling on a swingset facing her house, singing.

The girl didn’t know all the lyrics. When she came to a line she couldn’t recall she half mumbled/half hurried past it. END_OF_DOCUMENT_TOKEN_TO_BE_REPLACED 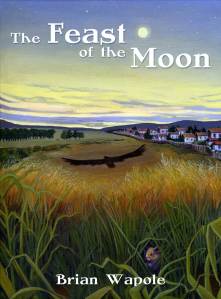 Save 30% off paperback edition from CreateSpace just for visiting my blog. Use discount code EHQDUSG7